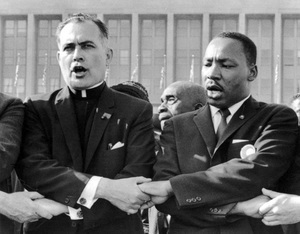 This photograph now hangs in the Smithsonian Institution’s National Portrait Gallery. It shows Father Hesburgh, Notre Dame's president, together with Martin Luther King Jr. during a 1964 civil rights rally at Chicago’s Soldier Field. That same year Father Hesburgh was awarded the Medal of Freedom, the nation’s highest civilian honor, for his visionary work against elements of apartheid in America.

From the exhausting fact-finding missions to the final deliberations over wording, Father Hesburgh was acknowledged as the principal architect of the Civil Rights Act and served on the Civil Rights Commission from its inception in 1957 until 1972, when President Nixon replaced him after he criticized that administration’s civil rights record.

When President Barack Obama spoke at Notre Dame in 2009, he acknowledged the central role the Holy Cross priest, awarded the Congressional Gold Medal in 1999, had played in this chapter of American history.